ONE LOAD OF BULL JIT

Jit Murad’s back! And it’s smooth and waxed! (Display of Jit’s back for audience members 18 and above only.)

CHARITY PREVIEW ON TUES, 24 NOVEMBER.
Opening performance by Rudy from Hitz FM.
All proceeds go to Nur Salam Children’s Home Chow Kit.
Tickets for the Charity Preview are at a minimum donation of RM 60 and include pre-performance food and drink courtesy of La Bodega.
Please call Kimmy on 0196712938 to book your tickets for this special Charity Preview. 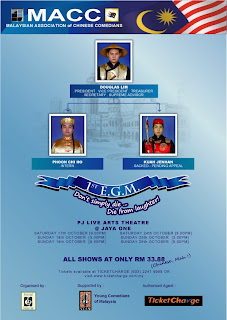 Douglas Lim had a dream. A dream to bring laughter to the world. A dream to spread joy across the land. Unfortunately, fate conspired against him. He was born Chinese and was not eligible for Raja Lawak.

But Douglas Lim never gave up. Convinced that the Chinese can be funny, he scoured the country for like-minded (and like-coloured) people. He searched high and low, far and wide and upside down. After 3 years, the search has ended. For behold, he is tired AND he has found 2 other jokers.

Together they are M.A.C.C. – the Malaysian Association of Chinese Comedians and this is their first E.G.M. (Easy Going Meeting). On the agenda are funny observations, song parodies, impersonations and witty revelations from the founding members of M.A.C.C – Douglas Lim, Jenhan and Chi Ho.

No stone is left unturned. Nothing is sacred – well except for sacred things which MUST NEVER be questioned by ALL Malaysians. M.A.C.C.’s first E.G.M. promises to be a laugh-out-loud affair for the whole family providing that your family is:
- English speaking
- easily amused
- at the show

M.A.C.C.’s first E.G.M. will commence at the PJ Live Arts Centre, Jaya ONE, on the following days:- 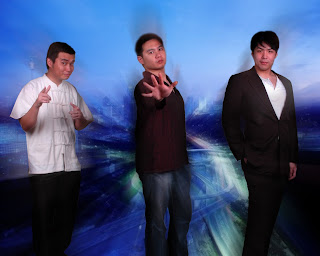 Douglas Lim is now primarily a STAND-UP COMEDIAN. But due to his greed, he is also many things. For example, he is an ACTOR on both screen and stage (1957 – Hati Malaya, Los & Faun, TenTenTen, Kopitiam, Homecoming, P.Ramlee the Musical, Tunku the Musical, Broken Bridges, etc…). He is also a COMPOSER & LYRICIST for tv and stage (Kopitiam, Reality, Ghost, Cuci the Musical, etc…).
His stand-up comedy performances include “Eh, Got Free Ticket Ah?” at Actors Studio Bangsar, Comedy Club KL, Comedy Club Singapore, Lake Club Comedy Night, Harith Iskander’s Nationwide Tour, “The June 4th Show” at No Black Tie and numeourous corporate events. Douglas Lim was nominated for Best Actor in a Comedy at the Asian TV Awards. He lost to Gurmit Singh (Phua Chu Kang)!

Having performed on stage since secondary school, Kuah Jenhan is a natural in the performing arts scene. He began his career in stand-up Comedy in The Actors Studio Bangsar's Freeflow and went on to win the Bond Stand-up Comedy Competition in 2006.
Now an actor, emcee and fresh from his recent appearance for Comedy Club KL alongside international starts Paul Chowdhry and Garry Who, he has performed in countless skits and plays over the years, from school, to college and now in Malaysian theatre including Rose Rose I Love You, No Limits and Ismail - The Last Days. Dubbed as "The Funniest Gravy (Kuah) of Malaysia", he can be found regularly performing his mix of locally inspired comedy at Time Out KL's Comedy Thursday and other YCOM shows around the city.

A comedian, actor, director and producer; the multitalented Chi Ho has been in performing arts since he discovered his love for it in high school and have directed and acted in several plays during his college life. Upon graduating, he chose to delve into theatre management by becoming the theatre supervisor of The Actors Studio Bangsar. He now is a member of the skit-based The ComeBackKings, written, acted and directed 15 webisodes for gua.com and launched a successful stand-up comedy career in 2008.
He now performs regularly around the Klang Valley, organising and performing in comedy shows for the Young Comedians of Malaysia (YCOM), a local comedy support group. Cheeky and very original, his stand-up routine sees him putting on a facade that is more familiar to his Chinese heritage.

PJ Live Arts is an arts centre where Malaysia and International talents converge to exchange, share and impart new and fresh ideas for the creation, performance and promotion of the performing arts in an atmosphere of openness, peace and understanding.
PJ Live Arts is a first of its kind, innovative community arts centre and theatre set in the centre of Petaling Jaya’s New Creative Community development of Jaya ONE, situated along Jalan Universiti, Petaling Jaya.
Posted by mamasan at 7:52 AM No comments: