Catch the Pros at our Tigerrr Show in November!

Actorlympics is on again next week! 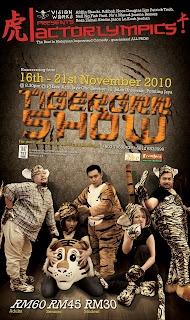 Vision Works brings you the Actorlympics Tigerrr Show, live improvisational comedy theatre straight from the perspiring loins of our dramatic corps of artistes – and we can guarantee THEY ARE ALL PROS!

And because we care, we are bringing you a show with a tongue-in-cheek theme that draws attention to the plight of our beleaguered Malayan Tiger, in this, our Year of the Tiger. Could it have gotten any worse for the poor Tiger in its own year? First, it’s already in danger, then some humans pimp it out for money. Well, we figure two can play at THAT game!

We have hooked up with WWF-Malaysia to bring more information and understanding to the theatregoing public – as well as the opportunity to find out how you can have a hand in doubling the current population of the Malayan Tiger!

So come on out for a night of fun and maybe you’ll learn something new about the Tiger and perhaps about us humans as well.

Find out more on our Facebook Page (search for “Actorlympics”) or go tohttp://actorlympics.blogspot.com/ or visit www.pjla.com.my.

For more info on Malayan Tigers and WWF-Malaysia, go to www.tx2.my.

Please check with the Box Office for nightly lineup of actors when making your booking.

At Frontera Sol of Mexico, ticket holders can enjoy a 3 course set dinner for RM45++ or RM60++ with a glass of wine prior to the show (please order at least an hour prior to the start of the show), as well as a 1-for-1 drinks special (buy one get one free deal for margarita, wine, beer, orange juice or coke).

Audience members will also receive a slice of cake and regular coffee with every main course order from The Bee upon presentation of their ticket.
Posted by mamasan at 2:06 AM No comments: 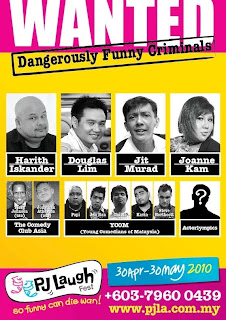 Go here for more info or check out the details at Afdlin Shauki' FB page here or the Actorlympics! FB page here.
Hope to see you there!
Posted by mamasan at 11:45 PM 2 comments:

Alumnus Afdlin Shauki at the Osaka Film Fest with Papadom

Afdlin Shauki is in Osaka for the International Film Festival, as the director for "Papadom". The film was invited to be in competition, and tonight at the awards ceremony, it was given THIRD place out of an overall twelve international movies in the Audience Award category!
This category is an audience choice award, so it was gratifying to know that the Osaka Film Fest audiences appreciated Papadom enough to give it that accolade!
Check out his facebook page here and follow him on twitter here for picture updates (tho I think twitter was down when he last updated, so it might have been missed).
Cheers!
C
Posted by mamasan at 7:57 AM No comments: