Because of our very hectic schedules last year, with the release of Sumolah and eventual recording of Actorlympics for TV (NTV7, 9pm Wed), we only did one run of Actorlympics for the stage. As their producer I think it's better if the actors only do one or two runs a year, but the actors are such gluttons for pleasure and stimulus that they would do a run every month if they could.

So last year we only had the one run, with a Superheroes theme: 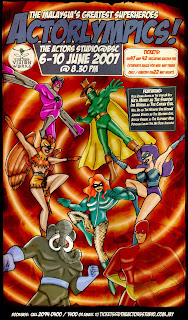 Look hard and you will find the 50% invisible boy, stapler man, chicken egg woman, elephant man, and so on. The actors came up with the ideas themselves, with some input from Isma, who drew the illustrations.
Posted by mamasan at 11:42 PM

When's the next show in Bangsar??